In this section we are going to see step by step how to add and subtract whole numbers in great detail.

Adding and subtracting whole numbers is a source of many errors and is also a concept of great utility in algebra, so it is very important that you have it very clear. It must be a fundamental pillar in your mathematical base.

We are used to add and subtract natural numbers, or what is the same, only with positive numbers. But with integers, we will have to operate negative numbers and that at first puzzles us a little.

The difference between adding and subtracting whole numbers from when we add and subtract with natural numbers is that we now have negative numbers.

We must have very clear, what are the integers and how they are ordered.

We are going to see it little by little so that you can assimilate concepts.

Adding positive numbers has no major complication. All you have to do is add the numbers, just like adding natural numbers. For example:

Keep this concept because it is key to understand the next section.

Subtracting negative numbers is a very confusing concept, because it is very difficult for us to understand that the result is greater in absolute value than the numbers we are subtracting.

To understand it better, let’s make this subtraction of negative numbers:

Before we continue, let’s make it clear why it is necessary to enclose negative numbers in parentheses when we operate with them and how to act with these parentheses.

In general, negative numbers are represented with the minus sign in front:

As they already have a sign, when we perform operations with them, if we write them like this, as it is, without adding anything else, it would create confusion to have two consecutive signs, as for example in this sum:

On the other hand, we could also enclose positive numbers in parentheses:

But since normally the positive sign is not written, it is not necessary to enclose them in parentheses, since we would not have the problem of having two consecutive signs:

How are parentheses of integers removed?

To solve an operation with integers enclosed in parentheses, first remove them, as we will see later.

The parentheses of integers can be removed when they are preceded by a plus or minus sign. We have two signs and we have to keep one of them.

To do this, you must use these rules:

The sign we have left is the same as the one we had inside the parenthesis.

If we do not have any sign in front of the parenthesis, it is equivalent to being preceded by a plus sign and the sign is kept. In other words, we can remove parentheses directly:

Do you realize what happened? The result of eliminating the parenthesis is to obtain a number with only one sign. You will see it clearer when we apply it in the addition and subtraction, do not worry.

Now we are going to continue with the additions and subtractions of integers.

We are going to see how it is solved step by step with an example:

So the operation is as follows:

Now, on the one hand, we add the positive numbers and on the other hand, we subtract the negative numbers:

And we have left:

And we have arrived at the result.

Let’s see another example and solve it a little faster:

Now we subtract absolute values and put the sign of the greater (in this case is greater the absolute value of -6 and therefore the result is negative):

And we would have the solution.
The fact that the negative number is larger in absolute value than the positive number, is a concept that usually causes much confusion, since our mind tends to make a subtraction as we have always known and is blocked.

For example, we block ourselves when performing this operation:

To solve it, we must follow the step of subtracting the absolute values and putting the sign of the major:

However, this step is performed automatically when the positive number is in front and is greater than the negative number:

But in reality, we have subtracted the absolute values and placed the greater sign in the result, without realizing it.

It also causes a lot of confusion when a positive number is subtracted from another negative of greater absolute value:

And in this case, it’s not automatic even if we turn it around:

To arrive at the result, we only have to subtract the absolute values and put the greater sign:

Always subtract the absolute values and put the sign of the major
.

To finish, let’s summarize the general procedure for adding and subtracting integers: 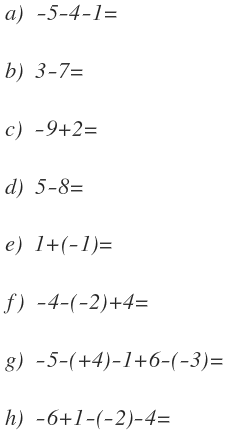