Next I’m going to explain the definition of derivative of a function in a point. It’s an abstract concept, but you need to know it.

There are cases in which we are interested in knowing how one variable varies with respect to the variation of the other variable.

This is what we call the average rate of change.

The average rate of change is the average value taken by the “y”, with respect to the changes of x, in a closed interval. 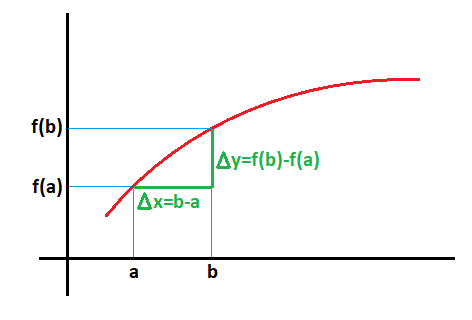 The variation or increase of the values of x is calculated as b-a and corresponds to the green horizontal segment.

The increment of the “y” values corresponds to the green vertical segment, calculated as f(b)-f(a).

Let’s see it with an example that surely is much clearer to you: Calculate the mean variation rate of the following function, in the closed interval [0,3]:

First we calculate the value of the function for x=0:

We calculate the value of the function for x=3

And now we apply the formula for the average rate of variation:

Keep in mind that it is an average and approximate value. The average rate of variation only serves to give us an idea of what the values of “y” vary from those of x, but it does not serve to calculate the value of the function for x=2, for example.

Let’s consider now that the value of x is increased by “h” units, that is, the initial value is x=a and the final value is x=a+h. (we consider the increment of “h” units to control how much x varies): 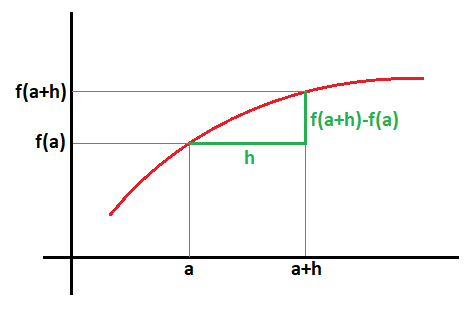 The average rate of change in this case would be:

You see, now the average rate of variation depends on h.

When we calculate the mean variation rate, as I mentioned before, we are calculating approximate mean values for a certain interval of x values, but the most normal thing is that within that interval, not all points have the same variation rate. In fact, the rate of variation does not vary only in linear functions.

If we consider h as a very small value, so small that it is very close to zero, we would be fine-tuning more and more in calculating what is the exact rate of variation at a given point, since in that case, the final value of x would be practically the same as the initial value and we would be in a very small range of x values.

For example, calculate the instantaneous variation rate of point x=2 in the next function:

We operate on the numerator:

We take a factor common to h, so it is annulled in the numerator and denominator and we get the result of the limit:

As you can see, although the average variation rate calculated for this same function was 4 in the interval [0.3], where 2 is located, the instantaneous variation rate for x=2 is equal to 5.

An example of this difference between the mean value rate and the instantaneous value rate we have with velocity. For example, to go from point A to point B, a car can take 2 hours at an average speed of 100 km/h. That doesn’t mean his speed is 100 km/h during the 2 hours. On your way, you may find sections where there will be more traffic and your speed is 80 km / h and others where you can go faster and your speed is 120 km / h.

Definition of derivative of a function in a point

The derivative of a function in a point corresponds to the value of the instantaneous variation rate in that point and is therefore calculated as:

The derivative of a function in a point can be written in all these forms, all equally valid:

This example is very similar to the previous one, since calculating the derivative of a function in a point is equivalent to calculating the instantaneous variation rate.

We apply the formula of the derivative of a function in a point:

We operate to subtract the fractions from the numerator and divide the result by h:

We remove the h from the numerator and denominator and solve the limit:

3- Calculate the derivative of the following function at point x=4:

4- Calculates the derivative of the next function at point x=1: 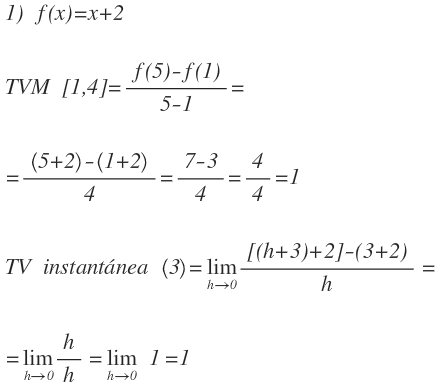 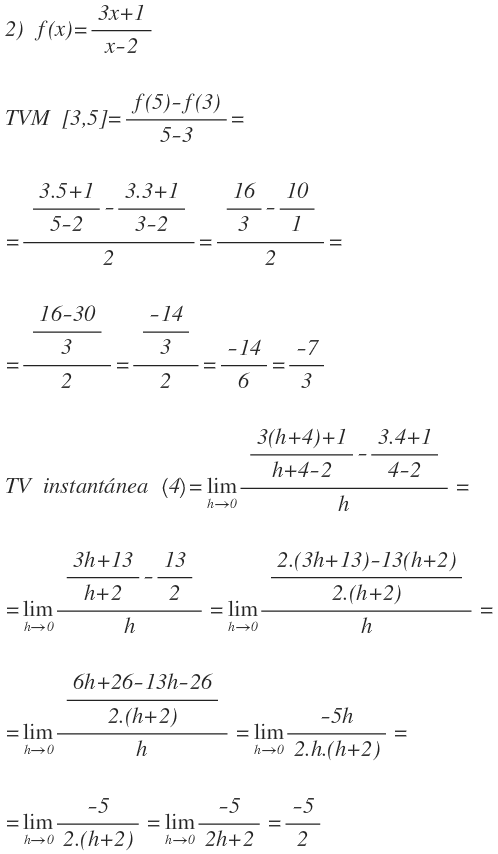 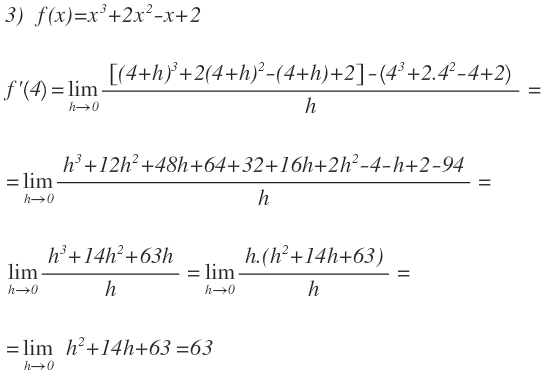 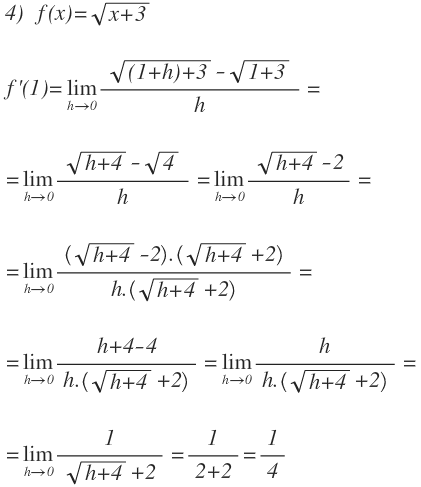