Now I’m going to explain everything you need to know to add and subtract radicals (or roots) step by step. I will show you the small difficulties you may have and how you have to solve them.

Before learning to add and subtract radicals , it is necessary that I teach you a couple of concepts that you are going to have to apply.

The radicals can be multiplied by a factor, called coefficient , which can be different in similar radicals.

Let’s see it with an example:

These three radicals are similar , because they have the same index and the same radicando. The coefficient is different.

However, this other radical would no longer be similar to the previous ones, because it has the same index, but the radicando is different:

Similar radicals are not always directly identified. Sometimes it is necessary to simplify the radical before.

For example, are these radicals similar?

At a glance no, because they don’t have the same radicando.

But let’s simplify each of the radicals, breaking down the radical to put it in power form and then extracting factors out of the radical, to see what happens: 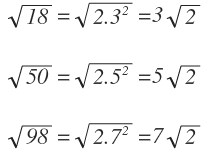 At the end, they have the same index and the same radicando, with a different coefficient each, so they are similar.

In order to know if the radicals are similar, it is necessary to simplify previously, extracting factors.

As a result, an equivalent radical, would be obtained, that is, its result would be the same

Just as a fraction can be simplified when the numerator and denominator can be divided between the same number and its result does not vary:

In the same way, if the root index and radicand exponent can be divided by the same number they can be simplified and the result remains the same:

Think that if we pass these roots to their exponential form, what we do is simplify the fraction of the exponent and as you know, the value of that fraction does not vary, so the exponent remains the same.

Simplify the index and exponent can help you solve roots.

For example, it is difficult to find the solution of the fourth root from two elevated to 8, but by simplifying index and exponent, the result is immediate:

It is also useful for finding similar radicals.

In this example, the radicals have neither the same index nor the same exponent:

But if you simplify the index and exponent of the first root, dividing them by 3, the radicals are already similar.

In the same way, you can multiply the index of the root and the exponent of the radicando and you will get another equivalent root.

How to add and subtract radicals with different incid

Before beginning to explain the addition and subtraction of radicals we must answer a very important question:

How to add and subtract radicals with different indexes?

This is a question that is asked by many students who intend to perform this operation, but what they do not know is that it is not possible to add or subtract radicals with a different index.

Consider that similar radicals can only be added and subtracted.

That said, let’s see how similar radicals are added and subtracted.

How to add and subtract radicals

For example, we are going to add the three similar radicals from the previous section:

In the first place we check if the radicals are similar and we see that they are, because they all have the same index and the same radicando. Although this time, we already knew that they were similar.

What is added and subtracted are the coefficients of each of the terms and the similar radical is maintained:

We add and subtract the coefficients and we already have it:

This is practically an addition and subtraction of numbers, which can be integers or, as in this case, fractions.

However, as you know, it is not always known that radicals are similar to the naked eye . The most normal thing is that you have to simplify them previously to check if they are similar.

Once we have the radicands decomposed and in the form of power, extract factors :

Now that we have extracted factors, we can verify that indeed the radicals are similar, since they are all roots of 2.

Date also tells us that the factors we have extracted are also multiplied by the coefficient the radical already had in front of it.

The next step is to multiply the numbers in front of each root, leaving:

And finally, we add and subtract the coefficients, maintaining a single radical:

There may be a case where you don’t have a single similar radical left. What you have to do in this case is to add those that are similar and those that are not, leave them as they are. Let’s see it with another example:

Same as in the previous example, we have to simplify the radicals to see if they are similar. We break down the radicands and write them in the form of power:

And we extract factors:

We can see that two of the radicals that have 3 as radicando are similar, but the one that has 2 as radicando is not similar.

We multiply the factors in front of the radicals:

Y we add only the radicals that are similar, those with 3 radicates. With the other radical we can do nothing, so the solution remains with the two radicands:

This is about adding and subtracting only similar radicals . Radicals that are not similar are simplified and left indicated in the solution.

Finally, we are going to see another case of those that you can find and is that the radicandos are in the form of fraction. For example:

To begin, you must apply the property that the root of a fraction is equal to a root fraction and the numerator and denominator are indicated in root form:

We decompose all the radicandos and write them in the form of power, both those of the numerator and those of the denominator :

Now we operate with the numbers in front of the radicals. In a first step, I am going to leave them in front of each radical in the form of a fraction, so that you can see that you have similar radicals multiplied by a coefficient (which in this case is a fraction), as in the previous examples:

We add and subtract the coefficients:

Instead of leaving the numbers in front of each radical in the form of a fraction, you can also take advantage of them to trade in some terms, such as in the first term, 2/2 = 1 and in the last term, 15/3 = 5.

As you see, in order to know how to add and subtract radicals, apart from what I explain here it is necessary that you master other concepts such as factorial decomposition, simplification of fractions or the properties of the powers