Below we will explain the basic steps to help you learn how to solve all the second degree equations, both complete and incomplete. Second-degree equations are also known as quadratic equations.

In general, second-degree equations are those where the x appears elevated to 2 in one of its terms.

They can be complete or incomplete second-degree equations, depending on whether they all have their terms or not. Here I’m going to focus on explaining the full second degree equations.

What are complete second-degree equations

The complete second degree equations or quadratic equations are represented as follows:

Where a, b and c are the constants of the equation:

As second-degree equations, they have 2 solutions. Remember that the degree of an equation is equal to the number of solutions.

Identification of constants in the second degree equation

The first step in solving complete second degree equations is to identify the constants correctly. As we have said before, constants are the numbers that go in front of x squared, x and the term that does not carry x.

In this case, in front of x squared, there is nothing, therefore a = 1.

Remember that when there is nothing in front of the unknowns, it is because they are multiplied by 1, or in other words, it means that there is a 1 in front.

Let’s look at another example:

Now, if we notice, the equation is slightly different, but it is cause of many errors if we are not careful. Let’s see why:

In the general form there are no less signs:

Therefore, we must transform our equation so that it is in the same way as the general form of the complete second degree equations:

Now we have it in the same way, where no minus sign appears and then a, b and c is obtained as in the first case:

When we have more practice, we will identify constants directly, without needing to transform our equation, but to begin with it is a very good way to avoid mistakes.

Once the constants have been identified, the following formula must be applied to solve the complete second degree equations:

Let’s see how it is used, solving the previous examples.

We have the first equation of second degree, in which we have identified the constants:

Now, we have to replace the value of each record in the general formula:

And now we operate, within the root, taking into account the hierarchy of operations: 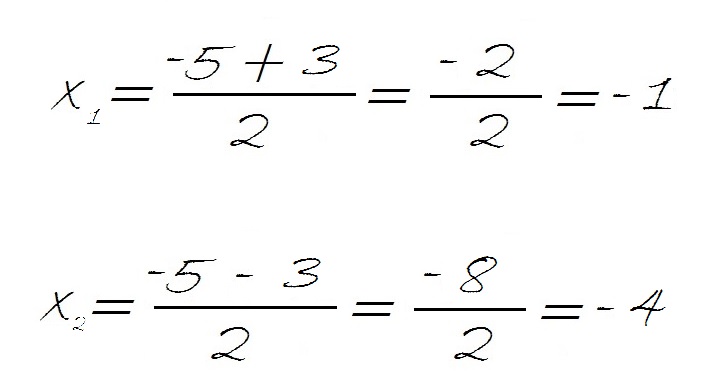 Then the two solutions would be -1 and -4. If we had the case that the fractions were not exact, they would have to be simplified.

Be very careful with the signs less than the constants.

Solutions to a second-degree equation do not have to be two different integers. In some cases, they may have a double or two complex solutions.

Many times when the solutions are not complete, you begin to doubt if your solution is correct or not.

And now, let’s see how the solutions of a second-degree equation can be.

We come across this case when the root does not have an entire solution. As a general rule, it will be left in the form of a root so as not to have to operate with decimals, although if we are solving a problem and the exact result is needed, we will have no choice but to solve the square root with the calculator.

For example, we have the following second-degree equation:

The first step is to solve the second degree equation using the general formula:

At this point, we see that the root of 5 has no exact solution. Therefore, mathematically, it is left in the form of a root:

It is not mandatory to leave it in root form, but it is more comfortable to leave it like this, so you don’t have to drag decimals. The result could be given with decimals and would be just as correct. It is the same as with fractions, which when a result is not accurate, it is left in the form of a fraction.

When we are solving a second-degree equation and the root or discriminant result is 0, it is said that we have a double solution, since we are going to have the same solution repeated twice. Let’s see how to act in this case:

As a priori we do not know how the solutions are going to be, we solve the equation like any other:

When we get to this part of the resolution, we see the root result is 0.

A serious mistake is to leave only 1 solution. Never do this because you will be suspended directly. What you do in these cases is work with 0:

It is resolved following the usual procedure, although it seems obvious to add and subtract 0, but it is a good way to reach the 2 solutions.

Another way of indicating the solutions is to develop the general formula to the end, to arrive at a solution but to indicate in writing that it is a twofold solution.

We come across this case when in the general formula, the discriminant or root result is negative.

If you haven’t studied the complex numbers yet, when you get to negative root you should put the following:

It has no real solution

This sentence is equivalent to saying that within the set of real numbers, there is no solution (the solution is found in the set of complex numbers).

Let’s look at it with an example:

In other words, as soon as we see the root with a negative content, we directly indicate that there is no real solution and that’s it. It is important not to forget the real word, because if you simply indicate “no solution”, it will not be correct, because it does have a solution, but not in the set of real numbers.

On the other hand, if you have already studied complex numbers, you have to develop the equation until you find complex solutions. That is, you must replace the root of -1 with the number i:

Below we will explain the basic steps to help you learn how to solve incomplete second degree equations.

What are Incomplete Second Degree Equations

The incomplete second-degree equations are those in which the constants b or c or even both are missing, i. e. equal to 0. We got three guys:

Let’s see how each one of them is solved.

We are faced with an equation of this type when the second-degree equation lacks the term with x or in other words, when b=0:

Once here, we have to move the square to the other side of equality as a root, and then get a positive and a negative solution:

That’s it, just like that. If in another equation, the root does not give exact, each result is left as a root with its corresponding sign in front of it.

The incomplete second-degree equations without number (or without an independent term) are those where c=0 in the general form and therefore have this form:

The first step in solving this type of incomplete equations is to draw a common factor, since an x is repeated in both terms.

Now, we must consider the following:

Therefore, we have two paths to follow: x=0 or x-3=0. In the first case, we get directly the first solution and in the second case, we have to take another step, which is to clear the x:

You have to be very careful with negative signs when drawing common ground.

This is the easiest type of all that is almost directly solved. Incomplete second-degree equations of this type are those that only have the term x², or in other words, when b=0 and c=0:

Let’s look at an example:

As in the case of incomplete second-degree equations with c=0, we must clear x²:

But, the peculiarity of this case is that we will always reach x²=0. So, when we move the square to the other side as root, we have that the result is 0, but it’s a double solution: