I’ll explain what radians are and teach you how to go from radians to grades and from grades to radians.

I will also briefly explain to you what radians are so that you can become a little familiar with them and show you how to operate the calculator when the grades are in radians.

Sexagesimal and radian grades. What are radians

Two units can be used to measure angles: the sexagesimal degrees and the radians. Both units are equivalent

And what does it mean that they are equivalent?

Because for the same angle, its value can be given in angles or radians and therefore can be converted from one unit to another.

Normally, we are more familiar with the grades, as this is the first thing they teach us. As you know, a full turn of circumference is 360°: 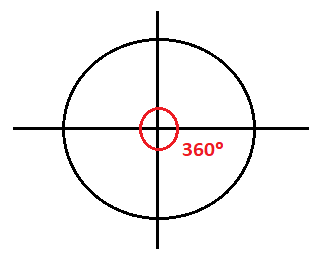 These same angles can also be measured in radians.

A circumference has 2π radians: 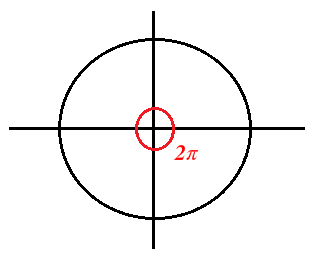 A right angle has π/2 radians:

And a semicircle measures π radians:

Radians are written as multiples of π, whenever possible, although it is not mandatory, but it is more convenient to work with multiples of π, than to drag decimals. It is also much more accurate.

But what is the equivalence between degrees and radians?

Equivalent between degrees and radians

The equivalence between degrees and radians is as follows:

From this equivalence, you can change any angle from degrees to radians or from radians to degrees and that is what I will explain to you in the following sections.

How to switch from degrees to radians step by step

To change from degrees to radians we do it by means of a rule of three, taking into account the equivalence between radians and degrees.

For example, how many radians is 60º?

And now we clear the x:

All we have to do now is operate. To leave the result in multiples of π , we simplify the numbers we have in the operation and we have left:

As I mentioned before, it is not compulsory to leave the radians in function of π , so if it is easier for you, you can replace π with 3,14 and operate with the calculator, the result of which will be:

How to move from radians to step-by-step degrees

To move from radians to degrees, we do it the same way as before, with a rule of 3, only this time, the question to clear will be the degrees.

Let’s look at it with an example:

We clear the x and we solve:

Grades and radians in trigonometric ratios with the calculator

To calculate the trigonometric ratios in both degrees and radians, you need to set the calculator to “degrees” or “radians” mode.

Make sure the calculator is always in the mode you want.

If you calculate the 90º sine with the calculator (which by default is in “degrees”), you will see that the result is 1:

However, if you calculate the sine of π/2 with the calculator in “degrees”, the result will not be correct, as it will give you 0.027:

Since you’ll really be calculating the sine of 1.57º (which is the result of dividing π by 2).

To calculate the sine of π/2 correctly and the result is 1, then the calculator must be in “radians”.

It’s a common misunderstanding, so always make sure you have it in the right way.