Would you like to learn how to introduce and extract factors in a radical? I explain it here with several examples and exercises solved step by step.

Knowing how to introduce and extract factors into a radical will allow you to simplify the radical, which is very useful in radical operations.

For example, in these two radicals:

The power of the radiand is greater than the root index, so they are not simplified. It works the same as fraction simplification.

Now I’m going to explain how to introduce and extract factors in a radical.

How to extract factors outside the radical

As I told you before, when in a root the exponent of the radicand is greater than the index of the root, it is not yet completely simplified, such as:

To continue simplifying it, it is necessary to take factors out of the radical and at the end it is this way:

If you realize, we now have a root, where the exponent of the radicand is smaller than the index of the root and is multiplied by an x. That is to say, there were the x’s that were inside the radical, we have taken them out and they are multiplying the root.

Let’s see, step by step, how to arrive at this result.

We have this root initially, with the exponent of the radicando greater than the index of the root:

As you already know from the property of power multiplication, the x raised to 5 can be expressed as a multiplication of powers with the same base, whose exponents will be added and therefore I will express it in this other way:

Why have I divided the power of this form?

Because it is convenient to divide them into powers with the same exponent as the index. In this case, as we have index 3, the exponent 5 is written as 3+2. If I had a 7, I would write it as 3+3+1, do I understand? Below you will see why I do it this way.

The first root, as it has the same index as exponent, is annulled by this property:

And finally we have:

Do you see now why I had to make groups of the same index number in the exponent?

What I was looking for was for the root to be annulled at the end.

Direct method to take factors out of the radical

The above procedure helps you understand how the extraction of factors outside the radical works, but if the exponent of the radicand is too high, that procedure can be very laborious.

The method I am going to teach you next can be used with both high and low exponents and is much faster and direct.

Let’s see it while solving an example:

If we were to do this with the general procedure, we should divide the power into as many powers of 5 as possible:

To know the number of powers of 5 needed, in this step, we have indirectly divided the power exponent by the root index:

We have 3 powers of exponent 5 and one with exponent 2.

We are going to extract factors from the root of the first example, the one we solved with the general procedure, so that you can check that the result is the same:

We divide the power exponent by the root index:

As you can see, the result is the same and the procedure is much faster.

We do the division:

In this case, the rest is 0, which means that inside the root there will be a factor raised to 0, which is equal to 1, so that in the end the root disappears:

And when we take factors out we have

When the rest of the division is 0, the root disappears, so extracting factors is another way to get the result from the root.

Keep in mind that this method is only a shortcut. We have seen the explanation of why factors outside the radical can be extracted with the general procedure.

Understanding the general procedure will help you detect errors or check whether you’re doing well, so it’s important that you know how to extract factors from both.

If you have several factors in the root, you must apply the factor extraction method for each of them.

Both the factors that remain inside and those that remain outside, always come out or stay multiplying.

If the factors are numbers, you must first break them down into prime factors and put them in the form of power.

Let’s see an example: Extract factors that are possible outside the radical:

First of all, we break down 24 and put it in the form of powers:

The method must be applied to extract factors in each of them.

The 3 has exponent 1, which is smaller than the root index, then stays as is, multiplying to 2:

We continue with the x: It is out with exponent 2 and there is none inside:

We can’t extract any factor from z either, because it has exponent 1, then it multiplies everything else:

We have already extracted all the possible factors, therefore we multiply again the numbers that can, inside or outside the root. In this case we can multiply 2.3, inside the root:

How to introduce factors into a radical

If factors outside the root can be extracted, they can also be reentered into the root.

To do so would be to take another step back, because what we want is to simplify factors, but even so, you can be another way to check if the factors have been extracted correctly and that the original root has not changed.

For example, introduce the factors into the radicals:

We multiply the exponent of the factor from outside by the index of the root:

The result of this multiplication is the exponent of the factor within the root:

Once the factor is in, we can multiply the powers, keeping the base and adding the exponents:

When should factors be introduced into the radical?

When within a root, we have another root multiplied by a number or by a variable and we want to simplify it to express it as a single root, like for example:

In this case we cannot multiply the root indices, because we have the 2 that is bothering us. We cannot extract it outside the square root, therefore, to remove it from the middle we have to introduce it inside the cubic root:

And now we can unify the two roots into one by multiplying their indexes:

On occasion, it is not necessary to introduce factors, since it is possible to solve the roots that are inside. 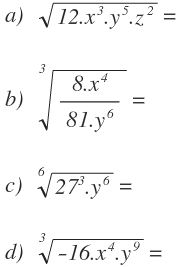 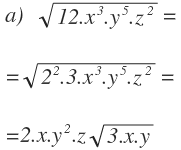 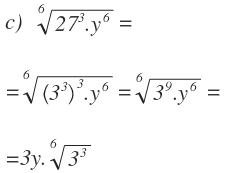 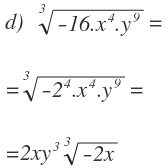 Simplify the following radicals by introducing factors, if necessary: 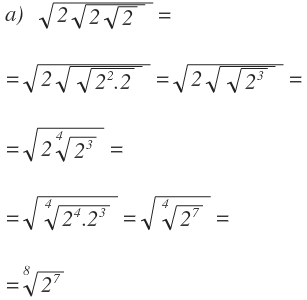 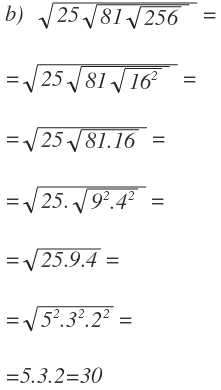