Now I’ll explain the division of polynomials. I will teach you how to divide a polynomial into another polynomial with the general method, with step-by-step exercises.

The division of polynomials is one of the topics that generates the most doubts, because it is necessary to take into account many concepts that are not normally fully understood and this causes many mistakes to be made.

Properties of the polynomial division

Before we go on, so that you can better understand this method, let’s remember the parts that make up any division, be it a division between numbers or between polynomials.

Any division is made up of the dividend, the divisor, the quotient and the remainder:

If we write these parts in the form of a polynomial, it remains

And they fulfill the following properties:

4- The dividend is equal to the divider by the quotient plus the rest:

If you check this formula with a division of numbers, you will see that it is also met.

The method I am going to explain to you corresponds to the general method of division of polynomials, since there are more methods to divide polynomials, such as the Ruffini method or rule, which we will see later.

This method is used to divide any type of polynomials and to do it you have to take into account the previous properties.

Let’s look at it with a step-by-step example:

The first step is to correctly place and write down the dividend and divider in order to begin your division.

Both the dividend and the divisor are written in descending order of the degrees of their terms, i.e. starting with the highest grade, and ending with the end of grade 0 (the independent term).

In addition, if the term of any degree is missing in the dividing line, a space is left in its place.

In our example, the dividend does not have a grade 2 term, so we leave a space in its place. It looks like this:

Once we have the dividend and the divisor in place, and with the corresponding gaps in the missing terms, we will begin to calculate the quotient.

Now, we must multiply this quotient term by each of the divisor terms:

We put them under the dividend, but in compliance with these two conditions:

As we left a hole for the term grade 2, we placed the 6x² underneath that hole.

And now for the dividend, we add vertically the two expressions we have:

By having each term below its similar dividend term, this sum is realized in a more orderly manner. This is also what we are looking for when we leave the gap in the dividend of the missing term.

In doing so, the term of highest degree is annulled, which is the goal of all the steps we have taken so far.

At this point, we have a new algebraic expression left in the dividend whose degree is greater than the degree of the divisor.

You have to keep dividing until the expression left on the dividend is less than the divisor.

Therefore, we continue to divide this new expression between the divisor, repeating all the steps again:

Now, as before, we multiply this second term of the quotient by each of the divisor terms and place them in the part of the dividend, below its similar term and with the opposite sign:

We add vertically in the dividend:

By nullifying the term of highest degree and obtaining a new expression, whose degree is now equal to the degree of the divisor, so we can still continue to divide.

We continue to multiply this third term of the quotient by each of the divisor terms and place them in the part of the dividend, below its similar term and with the opposite sign: 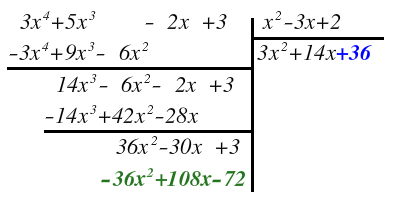 And then we add vertically again: 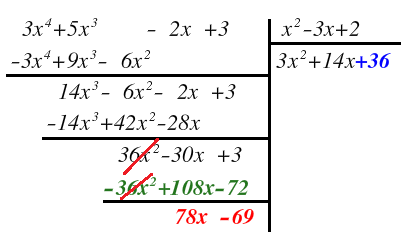 Now, the resulting dividend expression is less than the divisor grade. Therefore, we can no longer continue, so we have finished dividing.

Therefore, the result of the division is the quotient C(x):

If we want to express the dividend D(x) according to the divisor d(x), the quotient C(x) and the rest R(x), we can do it following the fourth property of the polynomial division:

These would be all the polynomials we need:

That if we replace it, it’s left to us: