Next, I’m going to show you the relation between the trigonometric ratios of angles of different quadrants, which we use to calculate the ratios of angles that are related to an angle of the first quadrant we already know.

Not only will I limit myself to quoting the formulas that relate them, but I will also explain to you where each of them comes from so that you can understand them better.

What are complementary angles?

The complementary angles are those whose sum is equal to 90º.

What are supplementary angles?

The supplementary angles are those whose sum is equal to 180º.

When two angles add up to 90º, the cosine lengths of α and the sine length of 90º-α are equal. Note that 90º-α is equal to another angle α, but measured from the y-axis: 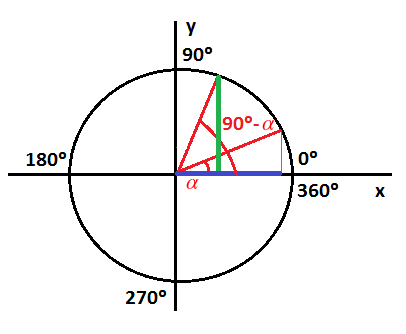 The sine lengths of α and the cosine of 90º-α are also equal: 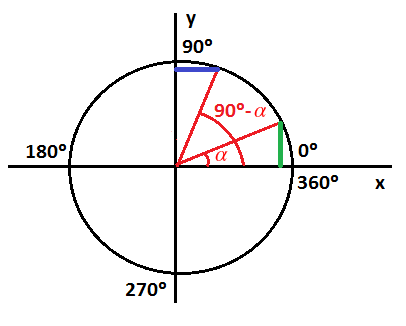 So, as far as I’m concerned:

The tangent between these two angles is also related, although it cannot be seen graphically:

On the other hand, the cosines have the same value, but changed their sign: 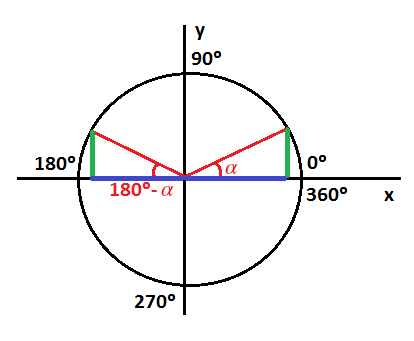 And the tangent, although not seen graphically, is thus related between these two angles:

Relation between ratios of angles that differ by 180º

On the other hand, the cosines have the same value, but changed their sign: 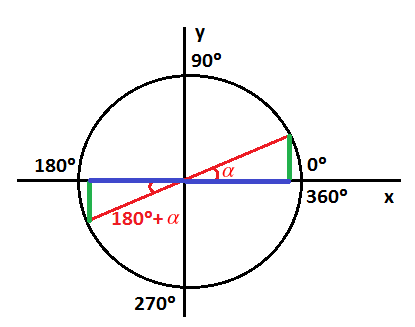 And the tangent, although not seen graphically, is thus related between these two angles:

Relation between ratios of opposite angles

When the angles are opposite, i.e. α and -α, the value of your cosine is the same and that of your sinuses has an opposite sign: 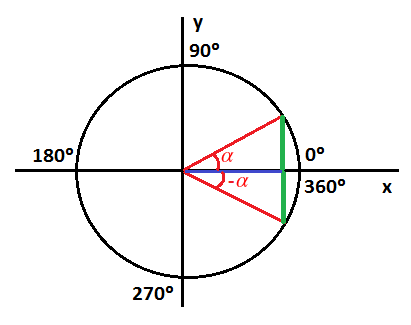 And for the tangent:

Relation between angle ratios differing by 90º 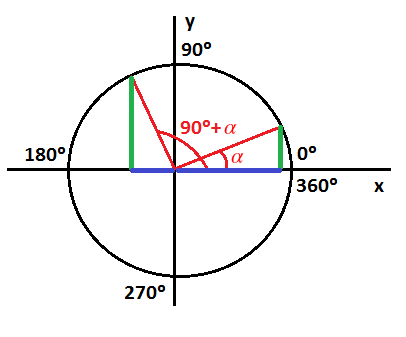 And the tangent of angles that differ by 90º is related in this way:

As you can see, by knowing the value of the ratios in the first quadrant, you may be able to calculate angle ratios in the rest of the quadrants with these relationships.

What good is knowing these relationships to you? Well, let’s look at it with a few examples.

The calculator only gives you an angle of the possible

As we have seen before with this performance:

Two different angles can have the same sine value. As a matter of fact:

On the other hand, if what they give you is the value of the breast, you have to keep in mind that the calculator will only give you the result from one of the two possible angles.

For example, they give you this value:

And they ask you to calculate the value of α.

The calculator, with the arc sine (inverse sine) function, will only give you one of the two possible values:

The other, you must calculate it yourself, knowing that the angle 180º-α has the same breast:

And if we solve the sine of this last angle, we can see that the value of the sine is the mime:

If you are given the cosine value to calculate the angle, the same thing happens: there will be two angles that have that cosine value:

For example, they give you this cosine value:

And they ask you to calculate the value of α.

Again, the calculator will only give you one of the possible values:

The other possible value is its opposite angle -72.54º or else:

As we see on the graph of the circumference.

If we check it we see that the 3 angles have the same cosine value:

We can calculate trigonometric ratios of related angles

Another application is that if we know for example the sine value of 30, we are able to calculate the trigonometric ratios of its related angles, that is to say: 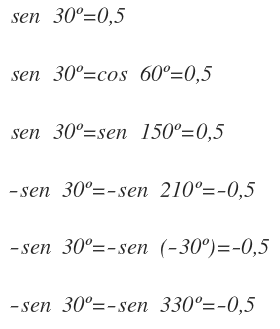 You are now able to obtain trigonometric ratios from many angles without using the calculator.