Next I will explain what you need to know to know about the theory and how to obtain the formulas of speed and acceleration and their vector formula.

We will also see which are the components that make up the acceleration.

Let’s start by defining the movement, a concept that will help us understand everything else.

If we were to wonder if we were moving when we were riding a motorcycle, the answer might not be so clear.

On the one hand, we see that the trees on either side of the road are indeed coming towards us, so the answer would be that I am moving.

On the other hand, my distance to the rider remains constant and therefore, I would have to say that I am not moving.

The solution to this paradox is to consider that movement is a change of position with respect to a reference.

With this definition, it is easy to understand the phrase the movement is always relative , since it is necessary to relate the position of an object with a chosen reference position.

To establish, without any doubt, whether a body moves or not, it is essential that absolutely nothing moves.

For many, many years, it was believed that distant stars were completely motionless in the sky and could therefore be used to indicate with absolute confidence whether a body was moving at absolute rest.

However, today we know that there is nothing in the universe that is at absolute rest.

We cannot speak, therefore, of absolute movement or rest.

Position of a body with respect to a reference

We call trajectory the line (curve or straight line) that a body follows during its movement.

The position of a body is determined by means of a vector r, known as a position vector, which has as its origin the reference chosen and as its end the place where the body is located. 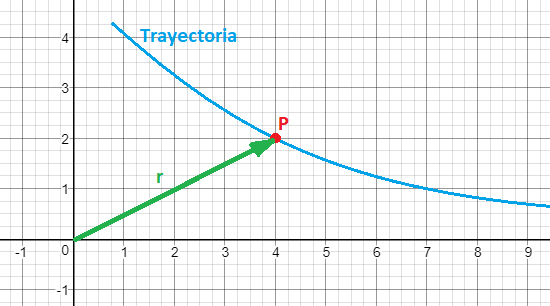 Thus in the image, it can be said that the position of the body P, with respect to the point O (0,0) is given by the position vector r:

As the mobile moves along its path, we will define a new magnitude to determine the position changes.

This new magnitude is the displacement vector, which is defined as the difference between two final and initial position vectors: 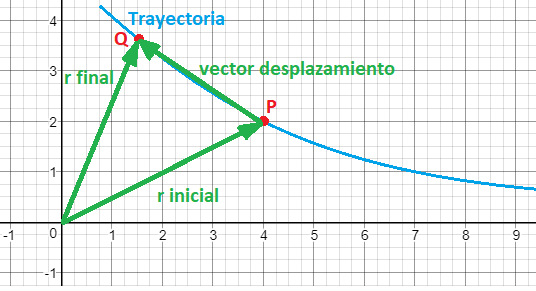 From now on we are going to refer to the displacement vector as:

The operator Δ (increment) indicates the operation of subtracting the initial value from the final value of a given magnitude.

All position changes are made within a certain time interval.

To distinguish between two mobiles that make the same movement, but at different times, a magnitude is entered, which takes into account the time it takes the mobile to make its path. We’re talking about average speed.

The average speed of a body is defined as the quotient between its displacement and the time it takes to travel through it:

The average velocity is a vector magnitude.

This is the same case. The denominator of this equation is a number, so the average velocity is equal to a number by the displacement vector:

So just to be clear, what’s the difference between speed and speed?

As speed is a vector magnitude and speed is the module of speed and is a scalar magnitude.

Instantaneous speed, or simply speed, is the average speed of a mobile phone when the time interval from one point to another is very small, so small that the time tends to be zero:

Operator d indicates that the increment is very small.

The speed also has the same direction and sense as the vector displacement.

As the time intervals are very small the end point of each interval is very close to the starting point and that means that:

1. The displacement vector module dr, coincides with the space traveled by the mobile: This would not occur when the time interval was large. Look at this image: 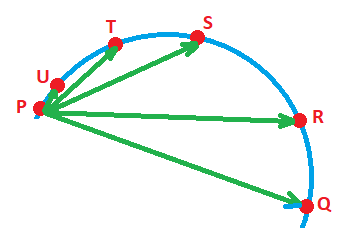 The mobile that leaves point P, after a certain interval of time, reaches point Q.

The displacement vector module measures less than the space traveled by the body. If we are decreasing the time, that is, the mobile is going backwards, we notice that the mobile has passed before by R, before by S, before by T, before by U and so on for each of the points.

The difference between what the curve measures and what the vector measures is decreasing. At the limit, when the time interval is very close to zero, that difference is zero.

2. The displacement vector and velocity vector are at each point tangent to the path.

Its module is equal to the module of the displacement vector divided by the time interval:

The speed module is also called speed or speed.

Acceleration is a magnitude that tells us if the speed of a mobile varies over time.

Be it a mobile that moves from point 1 to point 2 within a certain time interval:

At each point, it has speeds V1 and V2, which are different in module and direction.

The formula of the mean acceleration is equal to the vector speed variation within a time interval:

The formula for instantaneous acceleration is:

However, instantaneous acceleration is not usually calculated, as it is usually a fact of the problem. That is to say, it is the acceleration of a given object or body at a given moment.

Speed is a vector that can vary if you change its module or direction. In either case there has to be an acceleration.

From the definition of acceleration:

we can replace the velocity vector and its module and unit vector:

Let’s examine both summands of the second member.

The first one refers to how the speed module varies over time. Its direction is the same as that of the velocity vector, since it has its own unit vector.

This summand is known as tangential acceleration because, like speed, it is tangential to the path.

The second summand indicates how the direction of the speed varies over time.

It can be shown that the variation of the unit velocity vector over time is another vector perpendicular to it and whose module is:

where R is the arc radius of the path at that point:

Substituting in the acceleration equation will have:

As I mentioned earlier, the first summand of the second member is the tangential acceleration:

The second summand is called normal or centripetal acceleration:

Whose module is expressed by:

To sum up, the celebration has two intrinsic components:

The acceleration vector is related to its components as follows: 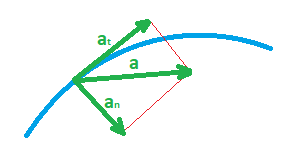 And their modules are related by the following equation: