We’ll see how to apply them step by step with some determined exercises.

For any angle, the trigonometric segments that define the sine and cosine form a right triangle with the radius, which has length 1: 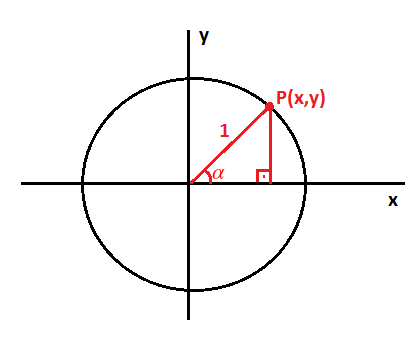 So by applying the Pythagorean theorem in this triangle, we have the sine squared plus the cosine squared equals 1:

This is known as the fundamental equation of trigonometry and relates the sine and cosine in the same formula.

Trigonometric relations of frequent use

Let’s now look at other formulas that relate to trigonometric ratios to each other.

I’m not going to stop at demonstrating each one of them, because it’s more important for me that you know how to apply them than you know how to demonstrate them. Therefore I recommend that you learn them and keep them in mind to solve your exercises.

The first is this, which relates the tangent, which is the relationship between the sine and the cosine:

We also know that the tangent is the inverse of the cotangent (and vice versa), so they are related by this formula:

And therefore, the cotangent can also be expressed as a function of the sine and cosine, inverting the formula of the tangent seen above:

On the other hand, if we divide the fundamental relationship of trigonometry between cosine squared, we have this relationship:

And this one if we divide the fundamental relationship between the squared sine:

Depending on the reason we know and the reason we want to calculate, we will have to apply the formula that best suits us, as each of them relates different trigonometric ratios.

We’ll take it one step at a time.

We are going to solve a couple of exercises on how to calculate the rest of trigonometric ratios, knowing only one of them.

Knowing that the sen α 1/3 and that α is between 0º and 90º, calculate the rest of the trigonometric ratios of the angle α.

Let’s start by applying the fundamental relationship, since it relates the cosine and the sine:

We’ll take care of the parenthesis:

We operate on the second member:

We pass the square of the cosine to the second limb as root and operate:

We have a positive breast value left.

The statement tells us that the angle α is between 0º and 90º. As we see in the lesson on trigonometric ratios of any angle, the angle is in the first quadrant: 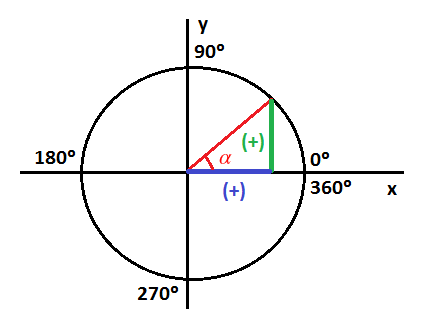 Where the sine and cosine are positive, then the value obtained is correct.

As we already know the sine and cosine values, we use this formula to calculate the tangent:

We replace the sine and cosine by their values and operate:

And we have already calculated the three main trigonometric ratios.

Knowing that the tg α=3/4 and that α is between 180º and 270º, calculate the rest of the trigonometric ratios of the angle α.

They give us a tip:

In principle, the most immediate thing you can think of is to use the tangent formula:

And since the numerator is the sen α and the denominator is the cos α, you might think that:

Well, this is not right. The sine and cosine can be a maximum of 1 and a minimum of -1 and in this case they are 3 and 4 respectively, so THIS SOLUTION IS NOT CORRECT.

Then how do we do it?

The fundamental relationship between trigonometry comes into play again:

Besides the fact that the sine and cosine can be worth between -1 and 1, they must meet the fundamental relationship.

Therefore, matching the formula of the tangent:

with the data that gives us the statement, we have:

From here we clear the sine, passing the cosine and multiplying the second member of the equation:

And this expression of the breast is replaced in the fundamental relationship:

We are left with a formula that has only the cosine as an unknown factor. So, let’s clear the cosine.

First of all, we solve the parenthesis:

We’re taking a common factor out of the square cosine on the first limb:

We operate within the parentheses:

Now we pass the square of the cosine as root to the second member:

And we solve the root:

We have a positive cosine value left.

The statement tells us that α is between 180º and 270º. As we see in the lesson on trigonometric ratios of any angle, the angle is in the third quadrant: 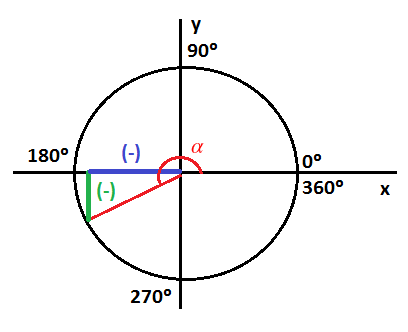 And therefore, the cosine must be negative, so:

In the expression where we clear the breast:

We replaced the cosine value we just calculated:

And we operate, getting the value of the breast:

That it is negative and therefore corresponds to the sign that the breast must have in the third quadrant.