Here I’m going to explain the types of events we can find when we do probability exercises and we’ll also see how operations are done with events, with examples solved step by step.

Imagine that we put in a bag 5 tickets with the numbers from 1 to 5. 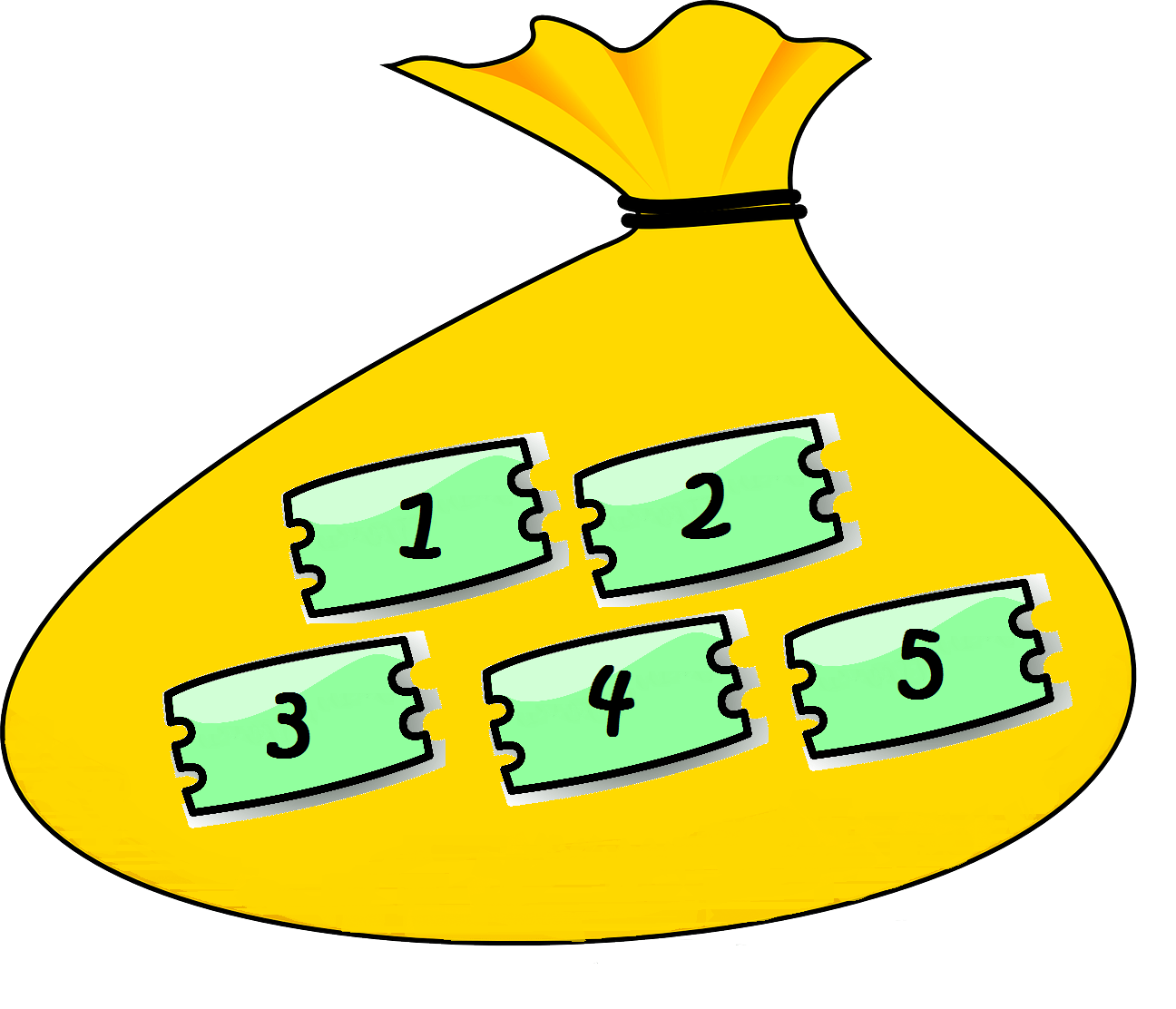 On the other hand, we call the sample space the set of all the possible results of an experiment.

In our case, the sample space “to take 5 tickets out of the bag” is:

Let’s see another example: What would be the event of throwing 3 coins?

We have to see all the possible results. Each coin can be heads or tails.

If we call C to the head and X to the tail, this result is CCC.

Other results can be CCX, CXC…

To take into account all the possible results, we make the following scheme, where if we follow each of the paths, we will have all the results: 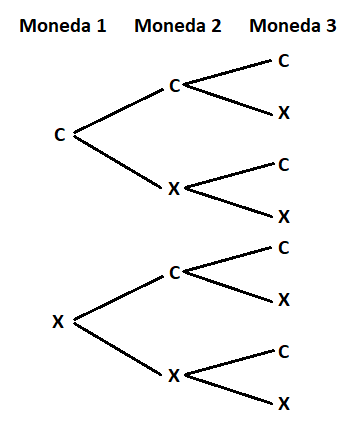 Therefore, the sample space of throwing three coins is:

Let’s see another example: What would be the sample space of “throwing three dice and writing down the sum of the points obtained”?

In this case, a possible result could be to roll the three dice and take out three 1. The sum would be 3.

Another result would be to roll two 1’s and one 2. In this case the sum would be 4.

Following this criteria, the highest sum would be when we draw three 6, which would be 18.

Therefore, in this case the sample space is:

Once we have our sample space clear, we are going to define the types of their processes that exist:

On the other hand, we can not take out a ticket with a number greater than 5. We cannot take out a 6, a 15 or a 35, because those tickets do not exist. Therefore, we are talking about an impossible event, that is, one that will never be presented. 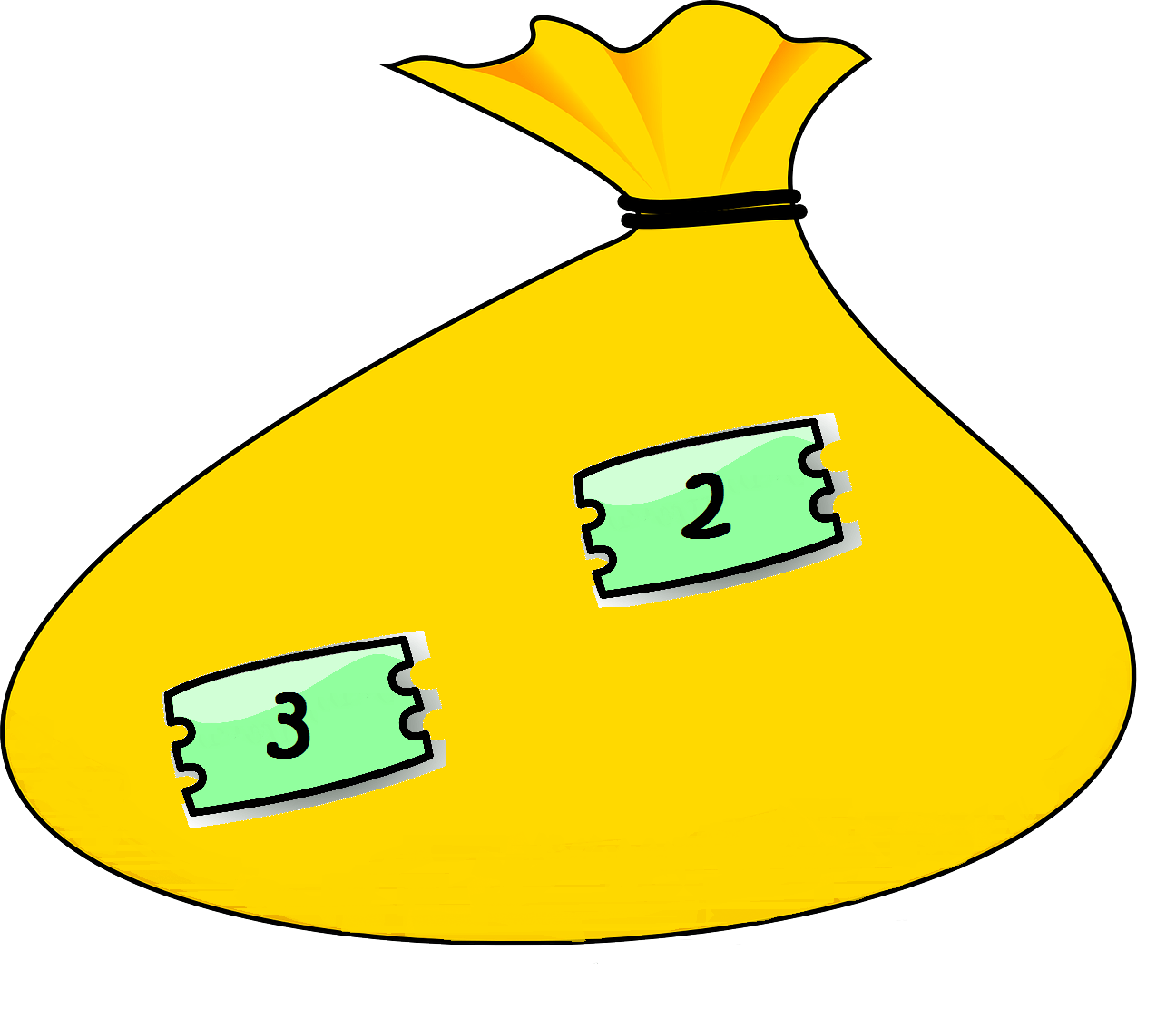 So the opposite event would be formed by: 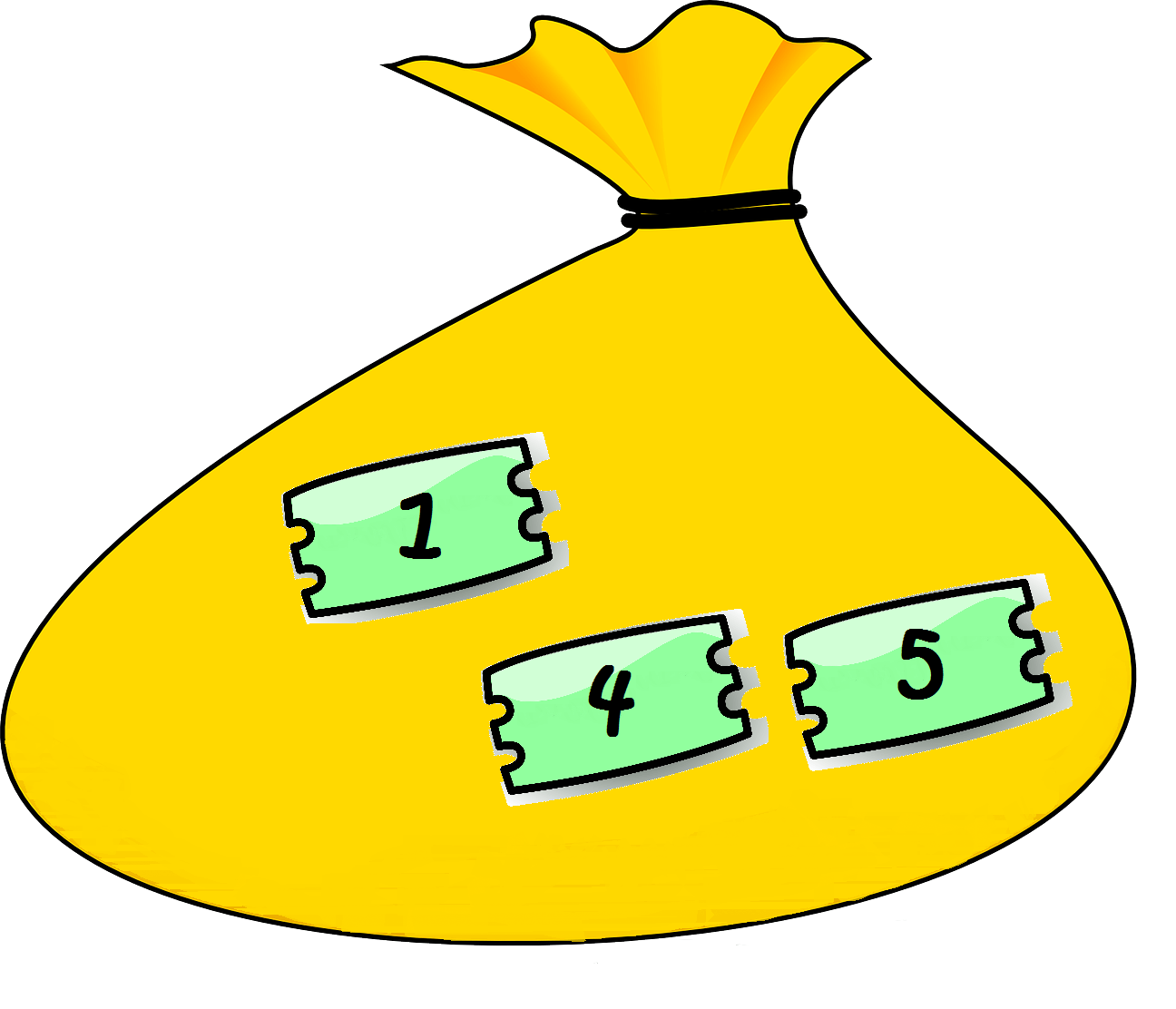 The opposite event is represented with a bar above the letter.

We are asked to extract 3 tickets and then put them back in the bag. We will call this event A:

We are now asked to extract 2 tickets and put them back in the bag later, which we will call event B:

If, on the other hand, we do not have any simple events in common, they are called incompatible events. For example, we are asked to extract 2 more tickets and then leave them in the bag again. It will be the event C:

A and C would be incompatible events because they do not have any simple event in common. If you realize, in addition to event C, it would also be an opposite event to A. An event can be of more than one type.

Let’s see now the operations with events of a random experiment step by step.

How to calculate the union of events

The union of events is represented by the symbol ∪, which is similar to a U.

For example the union of two events A and B is:

and it reads as A union B.

Now let’s see how the union of two events is calculated with an example.

Let’s imagine that we roll a dice. The event “get an even number” is called event A, which is made up of the numbers 2, 4 and 6:

Finally, to the event “obtain an odd number”, we will call it event C and it will be formed by the numbers 1, 3 and 5:

Let’s calculate A union B.

What elements should be included in the union?

Then there would be all those elements that are either in A or are in B, or are in both events at the same time.

Therefore the elements of A union B are:

The elements of A union C, would be those that are either in A or are in C, or are in A and C at the same time.

Therefore the elements of A union C are:

To read the union of events in the usual language, the union is replaced by “or”. In this way, A union B would read to obtain an even number or a number greater than 2.

In the same way, A union C, would read to obtain an even or odd number.

How to calculate the intersection of events

Let’s continue with the intersection of events.

The intersection of events is represented by the symbol ∩, which is an inverted U.

For example the intersection of two events A and B is:

and reads as A intersection B.

Now let’s see how the intersection of two events is calculated. To do this we will take the same events from the previous example:

Let’s calculate A intersection B:

What elements should be included in the intersection?

Then there would be all those elements that coincide in the two events, that is to say that they are in A and B at the same time.

Therefore, the elements of A intersection B are 4 and 6, because they are repeated in both events:

In event A and event C, no element is repeated. Therefore, the result of A intersection C is an impossible event and is represented with the empty set:

To read the intersection of events in the usual language, the intersection is replaced by “and”. In this way, A interescción B would read to obtain an even number and a number greater than 2.

Similarly, A intersection C would read to get an even number and an odd number.

How to calculate the difference in events

Let’s see the last operation we have left: the difference of events.

The difference of events is represented with the minus sign.

The difference of two events A and B is:

Now let’s see how the difference of two events is calculated, with the same events that we are taking as an example:

Let’s calculate A minus B:

How is the subtraction of events carried out?

As we are subtracting event B from event A, so we subtract the elements of event B that are repeated in A from event A.

Let’s see it step by step. We have event A:

Now, we identify the elements of B that are repeated in A, which are 4 and 6:

Finally, to perform A-B, we remove from event A the elements of event B that are repeated in A, that is, we remove 4 and 6, so we only have 2 left:

We will now perform the subtraction B-C:

We have the event B:

We identify the elements of C that are repeated in B, which are 3 and 5:

Finally, to make B-C, we remove from event B the elements of event C that are repeated in B, that is, we remove 3 and 5, leaving 4 and 6:

Check for yourself that for example B-C is not equal to C-B.

To read the difference of events in the usual language, the minus sign is replaced by “but not” or by “and not”. For example, the difference A minus B would read to get an even number but not a number greater than 2.

In the same way, the difference of B minus C, one would read to obtain a number greater than 2 but not an odd number.

Complementary to an event

There is a last operation that is complementary to an event. You have it explained above, in the types of events, as the opposite event. You can find it in both ways.

Describe the sample space associated with the following experiments:

b) Whether or not it rains for three consecutive days

We have a bag with 9 tickets numbered 1 to 9. We have to get ticekts out of the bag. If we consider event A as “a prime number” and event B as “a square number”, answer the following questions:

a) Calculate the events A∪B and A∩B

b) Are events A and B compatible or incompatible?

c) What are the opposite events of A and B?