The systems of two equations with two incognites, in general have only one solution, but this is not always the case. It may be that the system of two equations has no solution and that others have infinite solutions.

Why does this happen? Let’s look at it more slowly

Solution of a system of two equations

In a system of two equations with two unknowns such as this one:

Each equation corresponds to a line.

The equation of a line has this shape:

We can put each of the equations of the system in that way to make it clearer that they are two lines:

A certain compatible system is the system of two equations which, when solved, has a solution, that is, they can be solved.

The solution is the point where the two lines are cut if you represent them graphically. Therefore, the two lines of the system are cut at one point.

Let’s see it with an example. We have this system of two equations:

Let’s solve it by the substitution method. From the first equation clear the x:

This value of x replaced it in the second equation:

I operate and clear “y”: 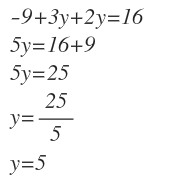 Now this value of y, I replace it in the equation where I cleared the x:

And I get the value of x:

So the solution of the system of two equations is:

Or what is the same, if you represent the two lines, their cutting point is (2,5).

We are going to represent the two lines and you will see that the point where they are cut is the solution we have just calculated: 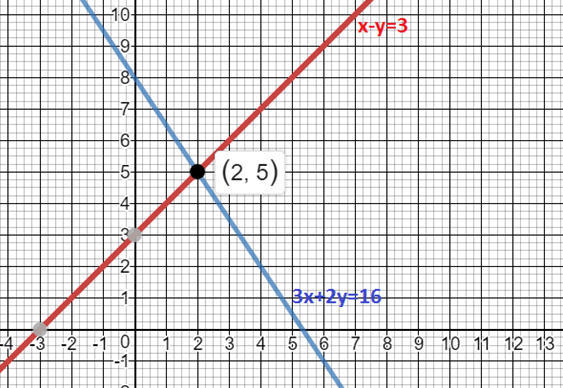 Compatible systems have a solution, which is the point where the two lines are cut [/box].

As I told you at the beginning, two equation systems do not always have a solution.

Straight lines may be parallel and never be cut. In this case we are talking about an incompatible system.

Let’s see it with an example:

If you represent the two lines of this system you will see that they are parallel and never cut, so it is an incompatible system: 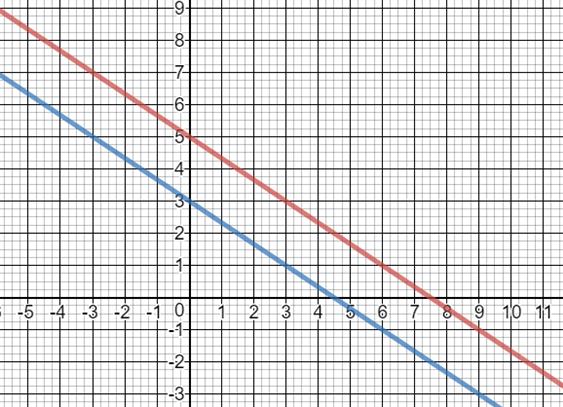 The lines are parallel when they have the same slope, but different ordinate, i.e. in the formula:

m is the slope

n is the ordinate

If in the previous system, we put the two lines this way: 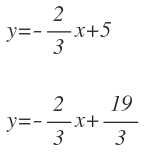 We see that they have the same slope, ie, the number in front of the x is equal, but the ordinate changes (n is different)

How do we know if a system is incompatible without the need to represent the lines graphically?

Let’s solve a system of two equations to see it:

Without knowing that it is an incompatible system, we begin to solve it. We clear x in the first equation:

And this value of x replaced it in the second equation:

I operate and clear the y: 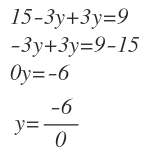 When solving one of the unknowns, I am left with a number divided by zero, the system has no solution and is therefore an incompatible system.

box]Incompatible systems have no solution (there is a number divided by zero), since the lines are parallel [/box].

The two lines can be of a third form, in addition to being cut in a point or to be parallel. They can be coincident, that is to say, that one line is on top of the other.

When one line is on top of another, they are actually the same line.

In this case, the system has infinite solutions, because it remembers that when we solve a system we are looking for the point of cut and in this case all its points are common.

You can multiply or divide all the terms of an equation by the same number and the resulting equation would be equivalent to the original. If you represented it it would be the same line.

For example, this equation:

I can multiply all your terms by 2 and the resulting equation would be:

And so it would be an equation equivalent to the original.

Well, in indeterminate compatible systems, we really have two equivalent equations, which would be equivalent to having two equal equations.

For example, this system of two equations:

It has two equivalent equations. We have just seen that the second equation is equal to the first equation multiplied by 2.

If we represent each line we are left: 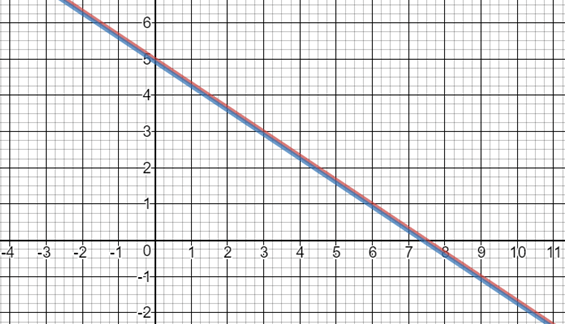 The lines are coincident, one is on top of the other, all their points are common and therefore have infinite solutions.

It is the same as if we solved a system with the two equations equal:

How do you know if a system is indeterminate compatible without having to represent it? Let’s solve one for you to see:

From the first clear equation the x:

I replace this value of x in the second equation:

I operate and clear the y: 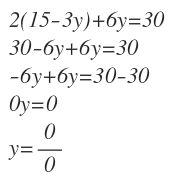 I am left with zero divided by zero. Zero between zero is an indeterminate number, so the “y” can take any value and therefore, the system has infinite solutions.

When solving one of the unknowns, I get zero divided by zero, the system has infinite solutions and is therefore an indeterminate compatible system.

Discussing a system means studying the possible system solutions based on a parameter we do not know from the system of two-unknowns equations and defining what type of system is involved in each case.

For example, in the following system, the coefficient of x of the first equation is parameter “a”:

We are going to discuss the system calculating the ones according to the values of parameter “a”.

We begin by solving the system, whose solution will remain in function of “a”.

From the first equation:

In the second equation:

We replace the “y” with the expression we just got:

We operate to remove the parenthesis:

Since in the first member, one of the coefficients is in function of “a”, we cannot operate with them directly, so we take a common factor to the x to be able to clear it:

And we pass the content of the parenthesis to the second member dividing:

At this point, the denominator of the fraction I have left will be the one that marks the number of system solutions and therefore the type of system.

If the denominator is zero, then the number will be divided by zero:

From the equation that results from equating the denominator to zero, we can clear the “a”:

Therefore, as long as a is 1/3, i.e. the denominator is zero, I will be left with a number between zero and the system is an incompatible system:

Being an incompatible system, there is no solution.

On the other hand, as long as a is not equal to 1/3, then the denominator will never be zero and therefore we will be dividing by a number and the system will have a single solution, so it will be a given compatible system: