What’s a math function? Can you explain it?

Understanding what a function is will allow you to have more clarity when it comes to solving function exercises and you will be prepared to understand more concepts that surround functions such as domain, image, relative extremes, their representation in the axes…

In this lesson, we will explain what a mathematical function is, so that you clearly understand the basic concepts without any doubt.

If you are not sure what a function is, you don’t understand everything around it either and that is a good reason for not knowing how to solve the function exercises.

Therefore, the goal of this lesson is that when you have finished reading it, you no longer have to ask yourself what a function is, know how to differentiate it clearly and be prepared to learn more about the concepts surrounding the functions.

Let me start by giving you an example. Get in case you want to check the temperature that will make tomorrow in your city at 5 pm. On the website where you consult the weather, you will find a function similar to this one: 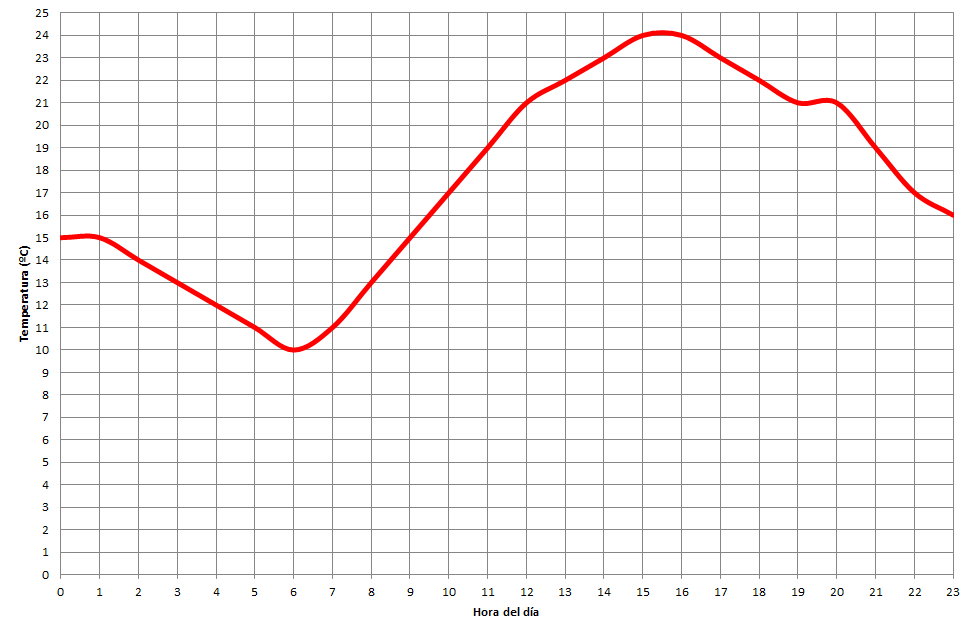 From this graph you get the temperature information at any time of the day. So, at 17 hours, it’ll be a temperature of 23 degrees Celsius. You know this because you look for the value 17 on the x-axis, you go up until it cuts with the graph and you look at the y-axis for its value, which is 23 ºC.

Without realizing it, you are consulting the graph of a function and not only that, you also know how to interpret it, because you are really getting a data.

Temperature and time are two related variables. This relationship is called a function and in this case, that function is represented by a red line.

There are many types of functions, but for the moment forget about them. What interests me is that you know what a function is.

In our function, we have two variables related: temperature and time.

On the contrary, time is going to pass without depending on anything or anyone, so it is called an independent variable. Mathematically, it’s often called an x.

The function has a very important characteristic that must be fulfilled and is that for each value of x it corresponds only one value of y. If you look, every hour, there is only one temperature value. At 5:00 p.m. I’m not 23 and 18 degrees, for example. I’m only 23 degrees.

If there is a relationship that for a value of x corresponds to more than one value of y, that will no longer be a function.

Therefore, in general, a function is a relationship between two variables, one independent (x) and the other dependent (y), and for each value of x there is ONLY ONE VALUE OF y.[/box].

And I repeat again that each value of x corresponds to ONLY ONE VALUE OF y, this is very important.

Analytical expression of a function. Types of functions.

There are several types of functions, depending on where the x is located. Let’s look at every one of them:

Polynomial functions are those in which x can only appear by adding, subtracting or multiplying other terms. It can be multiplied by a number or raised to an exponent.

In rational functions, besides being able to appear in the same operations as the polynomial functions, x also appears in the denominators.

The irrational functions are those that the x appears inside a radical, for example:

The x appears within trigonometric ratios.

The x appears as an exponent:

The x appears inside a logarithm:

The axis representation of each of these types of functions is different. We will be seeing it in the following lessons.
Value of a function in a point

Value of a function in a point

When we have no graph, to find out what value the function takes, i.e. the values of y or f(x) for a given value of x, all we have to do is substitute x for its value and then calculate the value of f(x).

Find the f(x) for x=1 of the following function:

We just have to replace the x with 1:

Therefore, the value of the function for x=1 is 2.

Have you understood everything? Are you clearer about the concept of function?

I have told you, that for each value of x, there is ONLY ONE VALUE of f(x), but there are times when there is none.