In an exercise they ask you to use the Ruffini’s rule. You’re about to, but you realize you don’t even know how to start. You’ve seen your teacher in class do it several times, but now you don’t know how I know the Ruffini’s method

As we discussed in the introduction, the Ruffini’s rule is used to solve third-degree or higher equations.

With the Ruffini’s rule, only whole solutions are obtained. If the equation has complex or real solutions, this method is invalid.

We will see that to obtain the solutions of the equation, previously it is necessary to factorize, so with the same example we will explain both concepts.

Let’s solve an example by explaining one step at a time.

We have the following equation:

1 – We identify the coefficients of each term, which are the numbers that go before the unknown. For the above equation, I represent them in green color to identify them:

2 – We draw two perpendicular lines on this way:

3 – We place the coefficients ordered by their degree of greater or lesser:

In the Ruffini’s rule, the grade decreases by 1 in 1 and each grade has its place. For example, if we have no term that has x², instead of grade 2, a 0 would be placed.

The numbers that we have written so far in the Ruffini method are equivalent to writing the equation:

4 – Now we write a number to the left of the vertical line. We’ll explain what number to put here and why. For the moment, we start with 1.

That number corresponds to number «a» in the binomial(x – a):

5 – We start to execute the method. The first hole in the second row is always left empty:

6 – The values of the first column are added and the result is placed at the bottom of the column.

7 – The number on the left is multiplied by the result of the sum of the first column. The result is placed in the hollow of the second column:

8 – The values of the second column must be added:

9 – The number on the left is multiplied by the result of the sum of the second column. The result is placed in the hollow of the third column:

10 – And so on until all the columns are filled:

The objective is that in the last column we have a 0. This is the explanation of what number to put on the left of the line:

If we don’t have a zero, we would have to try with another number to the left of the vertical line and restart the process.

Once we get a zero in the end, let’s see what it means:

What we have left in the last row is another equation, but now, the number to the left of 0 has a degree of 0 and it is increasing from 1 in 1 to the left. In this case, we have the equivalent of having this equation:

And as we’ve seen before, 1 left of the vertical line meant:

Which means that what we have so far is the product of those two equations, which is equal to the original equation: 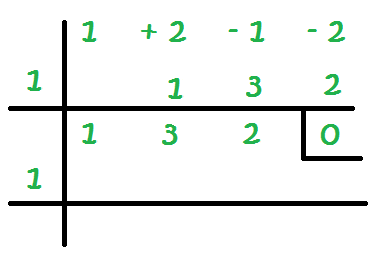 12 – Same as before, we multiply with the result of adding in each column: 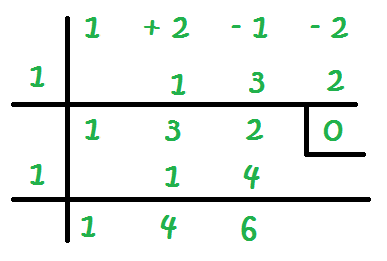 In the end we have a 6, and what we want is to have a zero. Therefore, we must keep trying, with -1, with 2, with -2… until we find the number that makes us have a zero in the last column. 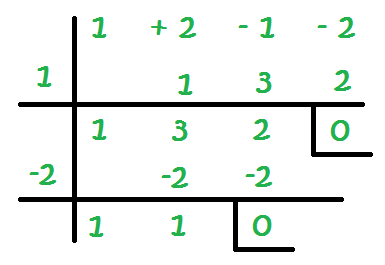 What do we do now? How do we know we’re finished?

The highest degree of the last row is 1, so we’re finished: 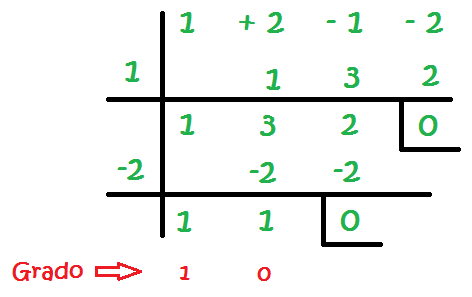 The result of factoring the equation by Ruffini’s method is the product of the last row and the numbers that are to the left of the vertical line, but expressed in equation form:

So our equation will be:

So far we’ve factored the equation. Now we’re going to solve it:

2 – Remember that when a multiplication of two or more factors results 0, it means that one of the factors is 0, as any value multiplied by 0 is 0. Therefore, any factor could be 0.

We have three equations of first degree to clear, from where we get the three solutions (as it is a third degree equation): 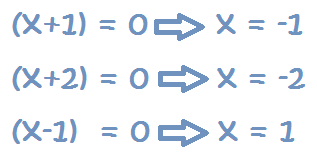 In this case, the Ruffini’s rule is used to make a division of polynomials, where the divisor is a binomial of form (x-a).

For example, you have  to perform the following division:

Like the divider is x-2, I mean, it is in the (x-a) form, we use the Ruffini’s rule. We must apply the rule only once.

This time, the number we have to place to the left of the vertical line is 2 (the a of the binomial x-a) and we don’t have to worry about whether we have a zero in the final column or not. The result will be the rest of the division:

The quotient of the division will be the polynomial formed by the coefficients of the last row:

And the rest will be the last element of the last row: